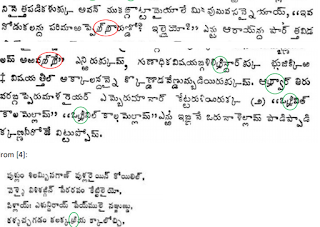 What is the purpose of proposing Tamil characters(ழ,ற) into Telugu blocks?

To digitize Tamil books written in Telugu script as they are.

Nope. Those documents use Telugu RRA and Tamil RRA at the same time.
And Unicode doesn't allow unifying two different looking characters. There is something called a 'graphemic' identity.  Unicode encodes characters, not pronunciations.
There is a reason there is Malayalam Letter II and Malayalam Letter Archaic II.  Both are for writing 'ii', but one is an archaic sign and the other one is modern. Since they look drastically different, you need two different code points for them.

Why can't you use different fonts or private blocks for digitalization instead of unicode block allocation?

Script rendering doesn't work that way. If you read the proposal, one of the options was to re-use the Tamil characters, but that would mean the font would never be rendered properly.
And it's within Unicode policy, to usually encoded borrowed characters as native characters.
See: Latin letter Omega or Latin letter Chi (These are greek characters borrowed into Latin)

Any historical evidence for usage of these 2 characters other than religious context in Telugu works?

Tamil verses to be recited in Telugu still use these characters. There is enough evidence for them in the proposal.

what is the historical relation of ழ or ற with Telugu language?

ழ was in Old Telugu but was lost in modern Telugu. And hence, the Tamil letter were borrowed into Telugu.

Do you have any support from Telugu community/organization on this proposal?

Why? A language or script does not belong to anyone. They are needed for digitizing existing books and that is enough to propose them. It's not that I invented something ex nihilo.
Latin has a few hundred obscure characters, Devanagari even more. Most of them are historical. A script always has a broader scope than the language. Telugu as such is cosmopolitan (like English. It is open to influences and is never shy to embrace change and, hence, it survives even after a dozen generations in Tamil Nadu). It has been used to write a number of languages other than Telugu: Namely, Tamil and Urdu. Even minority Dravidian languages like Kolami.
There are at least a couple of dozen books that need to be digitized. If you can tell me how to digitize them preserving the graphemic identities and linguistic cross-cultural influence in plain-text, do let me know. I'm all ears.

Can you elaborate any such inter language scripts allocations in Indic unicode blocks?

Zha is special for Tamil character, why should we offer to other language?

Nope, it is not.
See above. As of now, I can write  ழ  in Malayalam, Kannada, Telugu, Arabic, and Syriac.
Do not forget that Chinese also has the same phoneme.
In terms of phonology, it is called a retroflex approximate and is found in at least a dozen languages.
https://en.wikipedia.org/wiki/Voiced_retroflex_approximant

Can same happen if some one propose to add telugu script to Tamil script?

If there are borrowings, and it is so. You cannot change history and erase cultural interaction.
As I said, when two cultures interact, they inevitably mix. There is a reason why Yiddish, Syrio-Malayalam, and Arabic-Tamil exists.

This is imposing Tamil characters into Telugu characters

Why to spoil the uniqueness of both language?

How does adding two additional characters spoil anything? Does it stop people from doing anything that can do today?
Nope. They're gonna lay dormant. Like hundreds and thousands of Unicode characters and be used by some poor librarian or philology researcher, who wants to study how Tamil and Telugu interact and digitize the texts.
If you're not a philology researcher, it's not need for you.
For instance, if you are not an old English researcher, you don't need ſ (long s). You can happily write /sun/ without ever using the character, but again some poor philologist out there needs to differentiate sun & ſun. They need that. It is relevant to them. For others, it is irrelevant and doesn't affect them in any way.
These are just that. Characters for research, philology and digitization.
Unicode is full of old and archaic characters.  If I'm forced to use every one of them, then is it imposing. The last time I checked, no one is doing that :)
Posted by Neechalkaran at 10:35 AM